In this blog post, I apply reinforcement learning algorithms to a simple Dungeons and Dragons combat scenario. The code associated with this blog post can be seen in this github repo.

This section discusses the environment in which combat takes place.

As a first attempt, reinforcement learning was applied in a simple environment. The combat takes place in a 50ft x 50ft room and only involves two combatants:

Each combatant, along with the attacks listed above, is allowed to take the following actions:

For this experiment, Leotris was assigned one of the RL algorithms described below while Strahd was assigned a Random strategy in which actions were chosen at random.

The scenario was purposefully set up such that Strahd had an obvious advantage. However, if Leotris is able learn to keep his distance from Strahd and use his ShootArrow attack, he should be able to win a considerable amount of the games.

The following are learning goals I envisioned for Leotris:

In order to accomplish the above goals, the agent’s “state” consists of the following:

The figure below shows the result if both Strahd and Leotris are selecting actions at random. 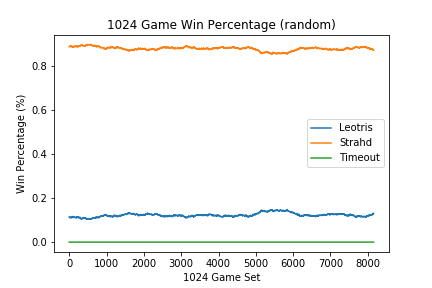 The above was used to evaluate whether goal 1 had been achieved.

The first RL algorithm I implemented was a vanilla DQN. However, after implenting it, I did not find immediate success. I then proceeded to add more “bells and whistles” and eventually arrived at a dueling double DQN. Below is a code snippet showing a portion of the dueling double DQN implementation used:

When the above code was initially implemented, the follow results were achieved: 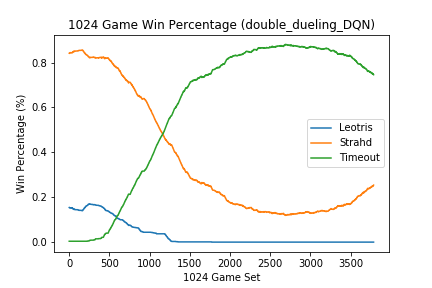 Similar results were observed for a vanilla DQN and double DQN. During training, the agent seemed to learn that the action ShootArrow was the best action to perform regardless of the current_state. Unfortunately, the agent would attempt to ShootArrow despite the fact that it had already used the action earlier within the same turn, which is against the rules. As a result, the action would be ignored and the agent would be prompted for its next action until the EndTurn action was chosen or the time limit was reached. The agent never learned when to take the EndTurn action consistently resulted a Timeout terminal state as observed in the plot above.

Although initial results did not show evidence that a reasonable strategy had been learned, the agent began to exhibit improved performance with a some key adjustments:

Once the above were adjusted, the agent was able to learn a reasonable strategy which exhibited the following results: 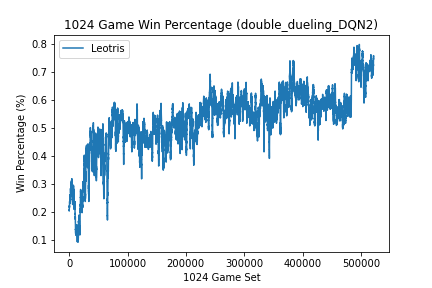 (I cannot stress how happy I was to see these results. Although the scenario was relatively simplisitic and seemingly not difficult, after countless attempts of failed agents, this was a sight for extremely sore eyes.)

Here is a code snippet showing the PPO implementation that was used:

With the above implementation of PPO a reasonable strategy was learned: 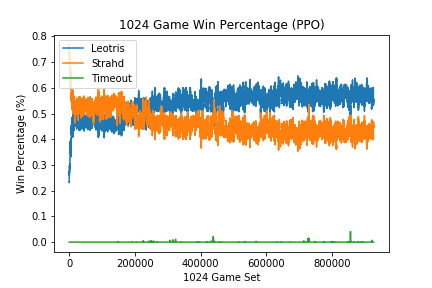 I believe that there were a couple contributing factors in obtaining these results. Again it was vital that the learning rate be sufficiently small (α=1e-5). With a larger learning rate of (α=1e-3), the following results were observed: 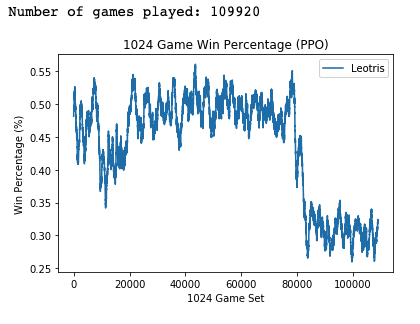 Similar to the dueling double DQN, the PPO agent seems to have gotten into a parameter space in which it could not recover from if α was too large.

I found that the PPO agent was not as sensitive to hyper parameter tuning and worked better out of the box. Perhaps the largest contributing factors is the fact that the agent did not use an epsilon greedy like exploration strategy. Instead, PPO agents select actions stochastically by nature and does not require an explicit exploration strategy. As a result, it was less likely to get “stuck” in a bad area because it would naturally revert back to a higher exploration mode.

Although I was not able achieve as high of a win percentage as the dueling double DQN, I don’t think it that this is indicative of the potential of PPO. I spent a lot more time adjusting hyper parameters and adding bells and whistles for DQNs. I believe if the PPO network was made deeper and the learning rate was properly tuned, it would be able to match the performance of the DQN.

Here are some key takeaways I gained from this project:

You May Also Enjoy

Natural Language Processing Summarization: Extraction Identifying which sentences are most important with PyTorch.

In this blog post, I will explore the use of a collaborative filtering algorithm on a real movie dataset.